The “Hell World” series is a challenge to create a new kind of science fiction action-adventure-thriller film series in answer to the many attempts by the mainstream film industry to create good SF entertainment.  They struggle to understand and appreciate the real potential and value of good quality, entertaining science fiction beyond comicbook stories.

This challenge aims to bring together dramatic human storylines with speculations about the future of humanity under the pressures of technological and scientific advancement as they confront a terrible threat to human existence.

Inspired by action / thriller series like “Alien” and “Predator”, the “Hell World” series will attempt to build on such successes to create a sustainable series of thrillers, adventures and dramas.

This is the first original concept – the Hell World “Trilogy”.  It will continue with further adventures and challenges around that terrible world and the crews who stand against the threat of mankind’s extinction.

To be developed either as an ongoing series of feature films or high-end TV films or a high-end adventure TV series, capitalising on the investment already made in sets, props, costumes, special effects through the first three films.

This is NOT a typical “traditional” Hollywood story project.  This draws from scientific and human reality not the nonsense of Hollywood Science Laboratories that, for example, gave us the computer virus that can defeat a gigantic alien starship.

These stories are not the usual tale about a plucky crew of a tramp spaceship struggling on the fringes of the frontier.

My stories are about rising to and defeating challenges, about upward growth and success in life, setting examples for the audience to follow and lessons to learn from, not just an endless repetition of “struggling against the odds” when faced with laughably rubbery special effects “monsters”.

I believe the audiences of the world are intelligent enough to understand superior, dramatic stories not just endless dumbed-down nonsense.

Do you share my ideals for better, intelligent entertainment?

Up-Date:  3rd, July, 2013 – Synopsis
Completed 10-page synopsis and business proposition for the new film series.
Up-Date:  5th, July, 2013
In light for the forthcoming disaster “Pacific Rim” I’ve been contemplating a Big Robot v. Big Alien Hell World spin-off.
Up-Date:  7th, July, 2013 – 9 Films
Current series potential now stands at nine concepts for “Hell World” films.
Up-Date:  12th, July, 2013 – 10 Films
Series now possibly now at ten films and counting….
Up-Date:  14th, July, 2013 – Board Games?
5.15am and I’m making new notes when struck by flash of inspiration for a series of board games around different aspects of the films and settings…
Wonder if they’ll work, and how?
Up-Date:  18th, July, 2013 – More news
Two new concepts in the last two days, so that now makes 12 films in the series.
Completing a Kickstarter video presentation
for the first fund-raising campaign.  Should have it all complete by or over the weekend.

Up-Date:  23rd, July, 2013 – Work, work…
Now working on crowd fund-raising appeal presentation, video, etc.
And possibly a thirteenth
film in the series.
Up-Date:  28th, July, 2013 – 14 Films
Series concept list now stands at fourteen films exploring aspects of the Hell World threat and how it’s dealt with.
Re-writing Kickstarter crowd funding presentations, should be available to publish in a week?
Up-Date:  4th, August, 2013 – Logo/Art
Completed first draft 3D illustrated model for artwork and posted (see top).
Also got distracted with another
TV series concept “Mounties SF” – I wanted to get it out of the way before focusing on “Hell World” crowd funding campaign in the next couple of weeks.
Up-Date:  13th, August, 2013 – 16 Films …
Another addition to the series, No.16 (if No.14 is split into two films), exploring a more alien and weirder experience of Hell world.
Have begun exploring Facebook and added new Page there to
update everyone on FB: http://www.facebook.com/HellWorldSF.
May take a while to master FB.
Up-Date:  22nd, August, 2013 – Work, work…
Tidying up other work, researching Kickstarter and fixing a little bug with some of my software (Microsoft patch failed, caused Big Issue on Adobe forums).  Should be ready to complete the public pitch in the next week.
Up-Date:  23rd, August, 2013 – Graphic Novel
Been thinking about the rewards for the Kickstarter campaign and this morning struck by the flash of inspiration – create a graphic art novel of the script.  If support is great enough then make Limited Edition for Kickstarters only (3-5,000 subscribers)????
Up-Date:  26th, August, 2013 – Design Sketches
Added three pages to show you a couple of the design sketches and further product ideas.  No time to go into all the technical details at this stage but you’ll now see more of the likely finished product.


Also modifying all the page header, facebook and kickstarter illustrations in-line with this…
(No, I’m not doing the Hermes ship as well, gah! I’ll be here all year!

)
Up-Date:  2nd, September, 2013 – Crowd Funding Page
Amending and polishing the Crowd Funding campaign page, now got some nice new illustrations to give a clearer idea about the rewards on offer.

Up-Date:  5th, September, 2013 – CyberWatch
Just reading an article on the new Samsung smart watch and immediately began inventing a better design.  I think it’s worth incorporating into the Hell World series as real, tangible practical merchandise.
Not a toy, but a real advanced digital/cyberwatch for every future enthusiast to buy into.
It will take time and money to
complete the hardware and logical design, new operating system of modify Android???  Hmmmm.
Up-Date:  8th, September, 2013 – Crowd Funding Project
Almost finished rewrite of the Kickstarter campaign, need to complete the video.  New thought – how can I engage with everyone on regular basis, through Facebook, through these up-dates or create a smartphone app for people to interact, add suggestions, (polite ones), etc?
Write it myself or volunteers?
Too much work, not enough time.
Up-Date:  9th, September, 2013 – Ultra-Smart Watch
Okay, I couldn’t get it out of my head, so decided to sketch out the concept for the Hell World, Ultra-Smart Watch inspired by the recent Samsung announcement of their black brick of a SmartWatch a few days ago.  Took most of today and a couple of hours yesterday, but here’s the result.  Hope you enjoy it all.
More details on the Project Page for the 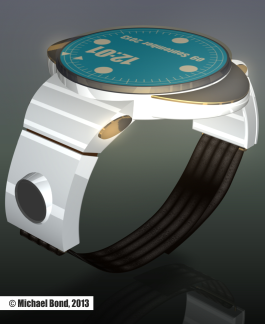 Up-Date:  9th, September, 2013 – Read-Through Video?
And another thought for your to savour in times to-come – if we raise enough money from the Kickstarter campaign
perhaps we can arrange filming of a read-through of the script.Â  Actors read through the script in a large studio, to give you all a taste of what the final production will feel like, or give me chance to tear the script apart and start again?
Load it on YouTube
next year?
Only if we reach higher targets on Kick-start.
Up-Date:  18th, September, 2013 – Sample Artwork
Just one possible design for the book covers and poster work… 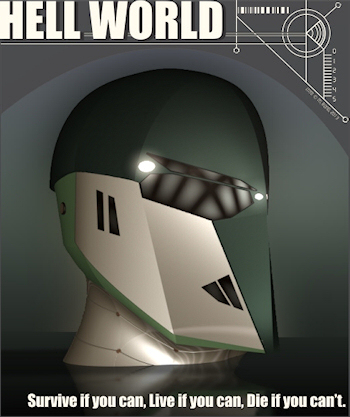 Still researching all the elements for the Kickstarter campaign. Paperwork, paperwork, paperwork..!
Up-Date:  23rd, September, 2013 – Stargate
Adding a Stargate sub-project to help you understand how the Hell World series is just the first step is more ambitious plans.  Join one and receive them all.  Stargate-X : Hell Worlds Tell Everyone! 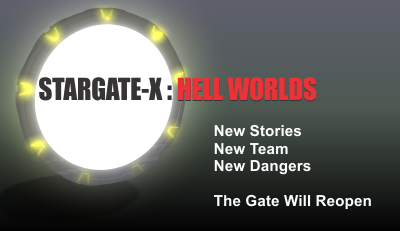 Hopefully there will be enough Stargate fans who share my desire for  a new TV show, in the style of the original SG-1 adventures and unfolding in a new, dramatic and grittier fashion.
Up-Date:  28th, September, 2013 – Videos coming…
Working on the Crowd Funding and follow-up videos, thought I’d make a batch all together, including a Stargate-X one.  Will need tweaking and editing, not perfect (I prefer the writing/designing/planning side not the production side).  Themes:  (1) Introduction & Funding Pitch, (2) Stargate-X, (3) Show Us The Money.
Should be out soon…
Up-Date:  2nd, October, 2013 – Logos & Videos
First presentation video is now complete and will go to Kickstarter for approval today…
Changed the original MWS Challenge logo to the new one – much more impressive (sad to see the simpler original black & white image retire, but it will return in the films!

).
Must now complete editing of the other two videos…
Up-Date:  4th, October, 2013 – Nearly there….
Registered the new web domains for both Hell World (www.HellWorldSF.com) and Stargate proposition (www.Stargate-X.com).
Project approved by Kickstarter, meets all their criteria, so will go live over the weekend. Just a final tweak here and there.
Up-Date:  5th, October, 2013 – Live Today
The Kickstarter campaign is now live!
Visit the web page to learn more and make your support known.
Tell Everyone!
Up-Date:  11th, October, 2013  – The Money
This is the answer to the key question from investors, studio executives, bankers and anyone wanting to join the later stages of the Hell World and related projects:  “Show Me The Money!”

Up-Date:  14th, October, 2013 – Stargate-X Live
The planned pitch for the “Stargate-X” TV show, to come after the launch of Hell World is now live.
If there’s enough support of Hell World then
the follow-up project could be a new Stargate show, subject to approval from MGM.
Learn about “Stargate-X” here.
This can make full use of the $200 million merchandise strategy, see previous Up-Date.
Up-Date:  20th, October, 2013 – Sloooooow…
Slow going with all the Kickstarting, not looking too good on this strategy, will have to begin thinking of an alternative route to launching Hell World…
Up-Date:  25th, October, 2013 – Stargate : Fallen
This morning/early afternoon.  Conceived of and wrote sample pages for new Stargate film.  Might be a way to kick-start everything if anyone’s interested.  You can visit the page and download the sample here:-

Up-Date:  2nd, November, 2013 – Nothing
No progress this week, and looks like the Kickstarter campaign will die a death.
Must now look to alternative strategies for fund-raising.
And the means no one will ever see the Limited Edition rewards.
Such is life.
Up-date:  8th, November, 2013 – Closed, for now….
The Hell World kickstarter campaign failed to raise enough support so now other options will have to be explored for this and the related projects.
I’ll rewrite these pages in the next few weeks.
Up-date:  24th, November, 2013 – 17th Story
Just added another concept to the list, so that makes about 17 films in the series.  And I haven’t even begun thinking seriously about the TV spin-off!
Up-date:  3rd, December, 2013 – redecorating…
Tidying up the web site and moving a few pages around, you should still be able to find everything but if not then drop me a line.
Up-date: 11th, August, 2019 – ARCHIVED… for now…
Since the original plan failed the Hell World concept was archived and set aside while Michael Bond worked on his other business plans for the creation of a new luxury supercar inspired by the Batmobile from the Dark Knight series of films. This remains the principal business plan for Michael to raise funds for the forseeable future. If successful the Hell world series will be reopened for business in the future. (This note was added during the upgrade of the Norfilms site in August 2019 to migrate into a WordPress system for easier management)..

SHARE This Page, Go On You Know You Want To – Pick Your Link